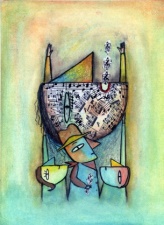 Do follows Albert, an archivist nearing retirement. As he sorts through recordings at the National Archives, he discovers a magnetic tape with the anonymous voice of a young woman singing Fado music. Mesmerized by her sensual and heart-rending voice, Albert is determined to locate the woman behind it.

He becomes unwillingly entangled in a wild cobweb of romantic setbacks, political conspiracies, State secrets, and occult groups. Torn between truth and absurdity, Albert will pursue his quest with the help of Jean-Daniel, the “urban cowboy.” Le Fa le do is a story of people who love and shun each other; an adventure combining the wild west, satire, political thriller, and of course music. (theatrefrancais.com)