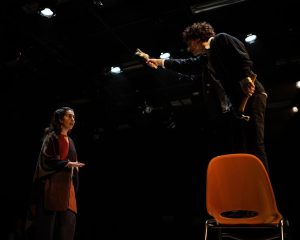 Benjamin won’t swim at school. His mum thinks he’s on drugs or has body issues. But Benjamin has found God, and mixed-gender swimming lessons offend him. But that’s not where his newfound fervour ends. His conflicts only grow as his devotion deepens, causing issues at school, and at home with his family. The Canadian premiere, MARTYR asks questions about the limits of faith in a secular society. (arcstage.com)