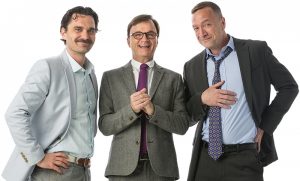 At Guy’s London flat, old friends and new gather to party through the night. This is the summer of 1985, and for Guy and his circle the world is about to change forever. Deliciously funny and bittersweet, My Night With Reg captures the fragility of friendship, happiness and life itself. A tragic-comic gay comedy of manners, Kevin Elyot’s Olivier Award–winning play has been hailed by critics and audiences alike, confirming its status as a classic of modern British theatre. (studio180theatre.com)