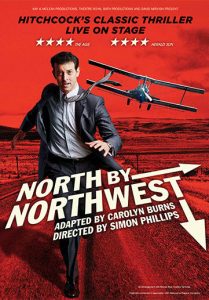 Roger O. Thornhill is a suave and successful advertising executive, abducted by thugs who insist he is a man called George Kaplan. There’s obviously been a mix up. When they don’t believe him, that’s infuriating. When they try to kill him, that’s frightening. And when they pin a murder on him, that’s time to run!

From New York to North Dakota, Thornhill is chased by spies, Feds, crop-dusting planes, and the inevitable cool blonde. Years before the James Bond films there was NORTH BY NORTHWEST–a  lightning-paced thriller that mixes glamour with espionage for a truly irresistible cocktail. (mirvish.com)