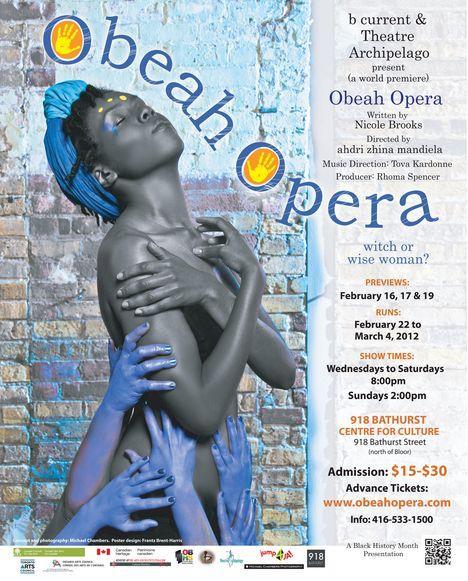 b current and Theatre Archipelago

Set in the late 17th century, Obeah Opera tells a story of life and work among women silenced by the most infamous ‘witch-hunt’ in history. Tituba and a handful of Caribbean women imported as slaves into the American colony of Salem are arrested and accused of practicing obeah! A healing art seen only as blasphemy and witchcraft through the eyes of the local Puritans.

We follow Tituba’s journey in the days before her capture, her incarceration, and her stand on trial in this uplifting Caribbean themed opera. Sung in complete a capella form, and performed by a cast of fifteen, Obeah Opera explodes myths surrounding the Salem Witch Trials, unravels the branding of obeah with evil and witchery, ties it back to its true spiritual nature rooted in West Africa, and finally gives voice to a group of women whose story has been missing from history books. (obeahopera.com)