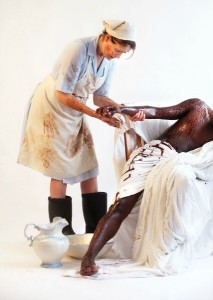 Oil and Water is a theatrical retelling of the incredible true story of Lanier Phillips. Shipwrecked in 1942, Mr. Phillips was
the only African-American survivor. He was saved and openly embraced by the “people of St. Lawrence” and his life was
forever altered. Lanier passed away this February, two days shy of his 89th birthday, his legendary story still resonating
with relevance and power. A ten-person cast sings an a cappella score that blends the Newfoundland folk tradition with
African-American gospel. (factorytheatre.ca)