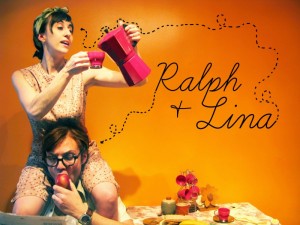 Why Not Theatre and Theatre Smith-Gilmour

Ralph + Lina, in the vein of early Fellini (La Strada), is a rough and tumble romance following the struggles of two Italian lovers in the face of war, immigration and old age. The award winning creative team of Michele Smith and real life husband and wife Dan Watson and Christina Serra, dives into their own family histories, to explore notions of dependence and separation in this passionate acrobatic comedy that radically reinvents the modern melodrama. (theatrewhynot.org)