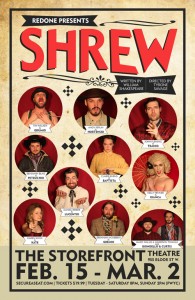 The beautiful and gentle Bianca has no shortage of admirers, but her mother insists that she will not marry until her older sister, Katharina, is betrothed. The only problem is that Katharina is the wildest, loudest, maddest shrew in the Klondike. It’s a low-down showdown with honky-tonk, puppetry, slapstick, and Vaudeville charm, and one of these gunslingers will either go broke or strike gold. (redonetheatre.com)

Due to the flooding of the Storefront Theatre the show moved to Theatre Passe Muraille’s Backspace on the 18th of February, 2014