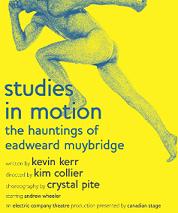 Studies in Motion: The Hauntings of Eadweard Muybridge (2010)

A physically and visually explosive multimedia spectacle inspired by the life, work and ghosts of the father of modern cinema. In 1885, Eadweard Muybridge sets out to catalogue animal movement and human gestures, but he is haunted by the ghosts of his past and the rational scientist that he has attempted to become must face the naked animal that remains inside him. This spellbinding profile of the man who froze time explores themes of memory, identity, and the quest for meaning. (canadianstage.com)