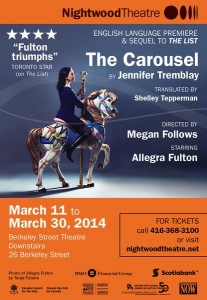 From Governor General’s Award-winning playwright Jennifer Tremblay comes the sequel to The List. Told through a series of carousel rides, a woman drives along the north shore of Quebec to be with her dying mother, and is thrust into a maze of memories, launching her quest to reconcile the unresolved relationships of three generations of women. (nightwoodtheatre.net)