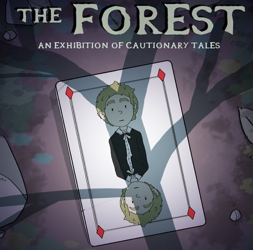 “Mathilda the Liar” adapted from “Mathilda, Who Told Lies and was Burned to Death” by Hilaire Belloc

The Forest is about a boy trapped in a twisted contract with the Aufseher, forcing the boy to play through twelve cautionary tales, heeding their advice, or paying with his life. In stories where children wake up dead stuffed with the hair they so envied of their sister, or are scalded at the dinner table for gluttonous eating habits, these are not the Disneyfied heartwarming children’s stories of today. (thestorefronttheatre.com)