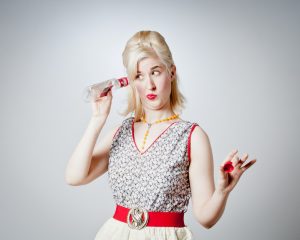 Presented as part of a double bill with Swell Broad

Based on folklore in Ms Harris’ family, The Homemaker follows Janette Pettitpas, a French-Canadian homemaker from Albertville, Saskatchewan who wants to share her life story as a show! The story of her marriage to her husband and to alcohol is told through cabaret ‘acts’ of poetry, dance, puppetry, song and intoxicated flashbacks all within her kitchen. Even though this play does not use the traditional red nose, “red nose clown” and bouffon directly influences the playful nature of the storytelling.
This play acts as a tribute to Ms. Harris’ relative and examines the struggles of being a 1960s homemaker, the justifications for some of Janette’s life decisions, the damaging affects of addiction and mental illness, as well as the limitations of an unbalanced marriage. (brownpapertickets.com)