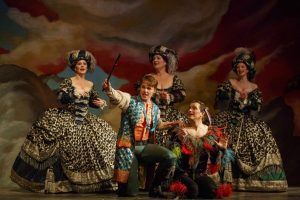 Mozart’s The Magic Flute is one of the most-performed operas worldwide. It is about a prince, Tamino, who is sent by The Queen of the Night to rescue her daughter Pamina from her nemesis Sarastro. Accompanied by the endearingly incorrigible Papageno and with the aid of a magic flute, the besotted Tamino ventures into the temple and quickly finds that all is not as it seems. An enchanting tale that delights audiences of all ages, The Magic Flute is perhaps Mozart’s greatest popular success. (operaatelier.com)