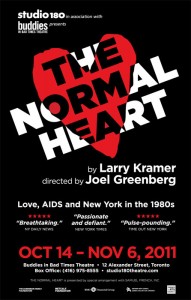 Larry Kramer’s landmark play about love and loss in the 1980s chronicles the rise of the AIDS crisis in New York City, seen through the eyes of writer/activist Ned Weeks as he battles against a world unwilling to confront the epidemic.

The Normal Heart’s call to arms caught audiences by storm when it was first performed in 1985. It became the longest-running play in the history of New York’s Public Theater, and is widely considered to be one of the most significant plays of the 20th century. (studio180theatre.com)