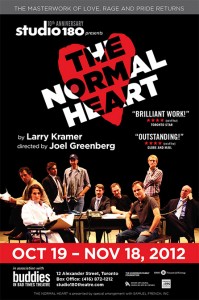 The story of a society in denial between 1981 and 1984, The Normal Heart unfolds like a real-life political thriller, as a tight-knit group of friends refuses to let doctors, politicians and the press bury the truth of an unspoken epidemic behind a wall of silence.

A quarter-century after it was written, this outrageous, unflinching and totally unforgettable look at the beginning of the AIDS crisis remains one of the theatre’s most powerful evenings ever. (studio180theatre.com)