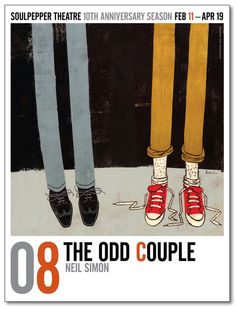 This renowned comedy begins with a group of men or “the boys” meeting to play cards in the apartment of a divorced fellow – and if the mess is any indication, it’s no wonder that his wife left him. Late to arrive is another fellow who, they learn, has just been separated from his wife. Since he is very meticulous and tense, they fear he might commit suicide, and so go about locking all the windows. When he arrives, he is scarcely allowed to go to the bathroom alone. As life would have it, the slob bachelor and the meticulous fellow decide to bunk together with hilarious results. The patterns of their own disastrous marriages begin to reappear in this arrangement; and so this too must end. (soulpepper.ca)