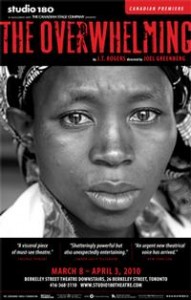 American academic Jack Exley travels to Rwanda to interview old friend Joseph Gasana about his struggle for good against daunting odds. But when Jack arrives in Kigali, he is unable to find the Tutsi doctor – or anyone who will even admit to having known him. Befriended by both locals and diplomats with veiled motives, Jack and his family become enmeshed in the tension, terror, professional risks and personal betrayals that they ultimately realize mark the start of a genocidal war. (studio180theatre.com)