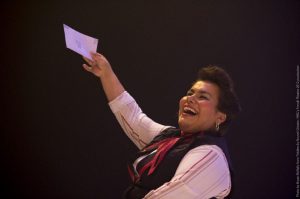 The (Post) Mistress, known in French as Zesty  Gopher s’est fait écraser par un frigo, tells the story of Marie-Louise Painchaud, postmistress of a town on the French River, who has the uncanny  ability to read the village mail without opening a single envelope, and turn each letter into a magnificent song. Because she knows everyone’s past and present, she takes us on a journey through their secrets, fantasies, and lies with songs in English, French and Cree. (theatrefrancais.com)