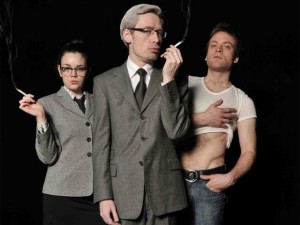 The Situationists tackles the anti-sex attitude of the progressive movement head-on. Parisian ex-pat professor Jacques  is intent on enacting political change in the contemporary world. He hopes to achieve this by turning to the principals of the Situationist movement, a group of political agitators who stirred up shit in France through their unique brand of art-based activism from the end of World War II through the famed Paris riots of 1968. (Show Facebook Event)