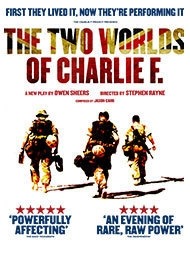 THE TWO WORLDS OF CHARLIE F is a soldier’s view of service, injury and recovery. Moving from the war in Afghanistan, through the dream world of morphine-induced hallucinations to the physio rooms of Headley Court, the play explores the consequences of injury, both physical and psychological, and its effects on others as the soldiers fight to win the new battle for survival at home. The play is a very personal and very moving look at the effects of war on individual combatants, but it also has a huge amount of humour and humanity. (broadwayworld.com)