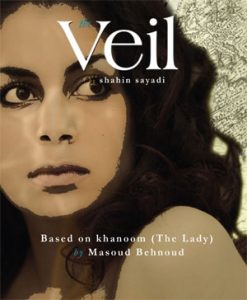 Experience a Persian princess’s epic journey from the palace harem to Europe where she survives personal and political traumas, and her return to Iran, a country to be forever changed by revolution. Written by Shahin Sayadi, based on Masoud Behnoud’s epic novel Khanoom, The Veil tells the story of one woman’s powerful struggle to survive the most turbulent events of the 20th century. (onelighttheatre.com)