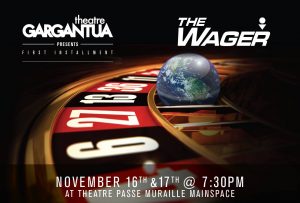 Every day we’re faced with information that either confirms or challenges what we hold to be true. When we’re forced to make critical choices we end up betting a lot on the correctness of our worldview.

The Wager’s exploration was inspired by the real-life story of a nineteenth century scientist who accepted a wager to prove that the earth isn’t flat. While he irrefutably won the bet, the flat-earthers refused to see the evidence for what it was and proceeded to ruin the scientist’s life with harassment, lawsuits and death threats.

Today’s wagers are between scientists and climate-change deniers, doctors and anti-vaxers, journalists and fact-denying politicians. Suspicion of well established facts corrupt large portions of the population, yet the stakes have never been higher as we gamble with the future of our planet. (theatregargantua.ca)