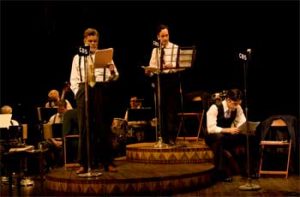 In 1938, Orson Welles staged what has become recognized as one of history’s boldest pranks, and the Art of Time Ensemble will show you how Welles pulled off the infamous radio broadcast that terrorized a nation: War of the Worlds.

Sean Cullen, Nicholas Campbell and Marc Bendavid star in this behind-the-scenes staging of the original broadcast, complete with an on-stage radio orchestra and live Foley sound effects by John Gzowski. Also on the bill is Herrmannthology, featuring a suite based on the scores penned by the legendary film composer Bernard Herrmann. From Citizen Kane to Taxi Driver, and Psycho toCape Fear, Herrmann’s dramatic themes are performed by an orchestra and accompanied by Tess Girard’s live film montage of the brilliant films they underscored. (harbourfrontcentre.com)