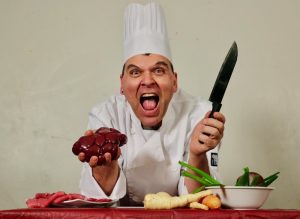 Titus Andronicus returns to Rome after decades of long battle with the Goths. In his pursuit of victory, he has made a dangerous alliance with supernatural beings, digging down into the underworld, pressing against the bizarre and terrifying. Presenting Tamora, the Queen of the Goths, as his war prize to Rome’s emperor, Saturninus, Titus sets off plots of revenge and murder, as each party seeks vengeance for the wrongs done to them. (broadwayworld.com)