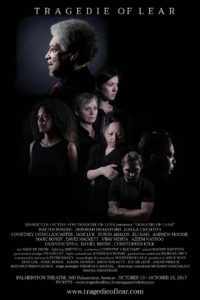 In this production of Tragedie of Lear, the aim is to explore the relationship between aging parents and their adult children through the lens of mental illness.

This is a subject that is very much on the forefront in our own city and will resonate with many of those who are going through, or will be going through similar events. As the Canadian population is moving towards a higher percentage of retirees, the “sandwich generation” (the children of these retirees) is feeling increased pressure in learning to cope with its changing child-parent dynamics. Sadly, when mental illness is a factor, these changing dynamics become even more fraught with diverse challenges.

Though we see the question of caring for the elderly as a modern problem, Shakespeare was able to explore it in his day through King Lear, proving that this is a universal concern which spans centuries. We hope our approach to the play will allow modern day Toronto audiences to connect with the play and its concerns. (tragedieoflear.com)