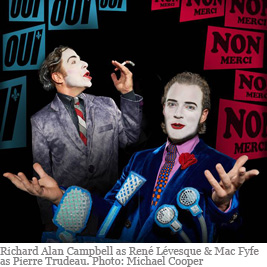 The visions of Pierre Trudeau and René Lévesque are irreconcilable; the conflict is a comédie noire. Combatants, allies, and spies include: PQ Minister Claude Morin and his RCMP handlers; Police informer Poupette and her lovers in the FLQ; the Queen and a Gang of Premiers; plus Maggie Trudeau and The Rolling Stones. (youngcentre.ca)