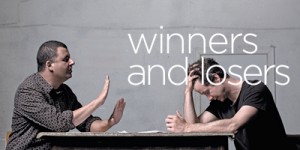 Winners and Losers is a staged conversation that embraces the ruthless logic of modern-day capitalism, and tests its impact on our closest personal relationships. Theatre artists and long-time friends Marcus Youssef and James Long sit at a table and play a game they made up called “winners and losers,” in which they name things and people — Pamela Anderson, microwave ovens, Goldman Sachs, their fathers — and debate whether, from their perspective, these things are winners or losers. As the conversation unfolds, the competition quickly begins to have an unanticipated cost. (canadianstage.com)