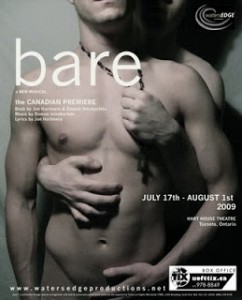 BARE is a pop-rock musical about the coming-of-age of five high school seniors at a Catholic boarding school. Knowing their stay in this insular world is drawing to a close, each of them question where they are in their lives and what the future holds in store. Answers are sought in the church confessional and in less formal venues including a stage, a rave, and a well-locked dorm room. The story focuses in on a secret love affair between two boys, Peter and Jason.  Though Peter is ready to tell the world about their relationship, Jason fears the repercussions.  BARE is the beautiful and moving story about love, fear, acceptance, and finding yourself.(uofttix.ca)