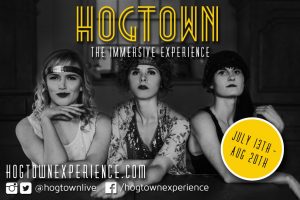 It’s the night before a critical mayoral election that will determine the future of the city. Although prohibition is still in full effect that’s not stopping tonight’s host, union boss Bob Delacourt, from opening the doors to the hottest gin joint in the city, featuring the White Hot Jazz Band (hint: its in the basement).  Not exactly the place you’d expect to find the two front runners but tonight both incumbent Thomas Foster and his chief rival Councilman Sam McBride will make an appearance.

Foster is planning to broker a secret deal with Delacourt, since the union boss is the one with real power in this town. Problem is, Delacourt and his membership are currently backing McBride in the race. So tonight? Its time to play lets make a deal to become the next mayor of Toronto. Speaking of deals: rumour has it that kingpin Chicago rum-runner Franco Vitale is headed to Hogtown this very night to secure a bootlegging foothold on the city. But thats just the beginning  (hogtownexperience.com)