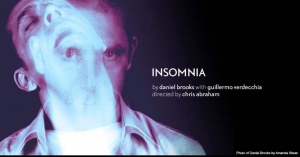 John F. tosses and turns as he wallows in his worst fears his troubles exacerbated by a failing marriage, a faltering career and an unfinished masterpiece. Then there’s his successful and overbearing brother, not to mention John’s unrequited love for his sister-in-law.

INSOMNIA casts an hypnotic spell, taking is into the restless and anxious soul of not only one man, but a culture teetering on the brink of catastrophe. (necessaryangel.com)