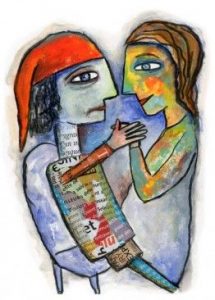 It was more than 340 years ago that the famed Parisian author imagined this old and zany patriarch who, like most characters in Moliere’s body of work, has not aged a bit! As he’s done for hundreds of years, we expect our imaginary invalid to list the many aches and pains he supposedly suffers from…but if Argan, the character at the heart of Moliere’s comedy, truly surfers from a medical condition, it would have to be acute hypochondria. Indeed the old man loves to surround himself with the best and brightest doctors and pharmacists money can buy—which would be completely understandable if he wasn’t in fact in perfect health! His admiration for the medical profession has in fact turned into an obsession. It is easy then to imagine his disappointment when Angélique, his beloved daughter, falls madly in love with Cléante, a young man who is not a doctor! Meanwhile, hoping to get her hands on his fortune, Argan’s second wife, Béline, is patiently waiting for one of her husband’s imaginary illness to finally become real. Toinette, the servant with an uncanny talent for disguise, jumps at the chance of playing doctors, mumbling hilariously her way through medical gibberish and determined to remedy these unfortunate situations. (Show Facebook Event)