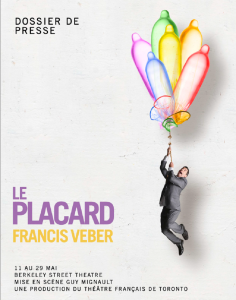 Pignon, mild-mannered accountant for a condom factory, ignored by those around him, finds out he’s about to be sacked. Already overwhelmed by personal problems, this last blow of fate destroys him; all he can do now is throw himself out the window. He is stopped in his tracks by his next door neighbor who concocts a scheme: pretend to be gay so he can keep his job. Pignon will then benefit from an unusual reintegration by coming out of a closet he was never in. (theatrefrancais.com)