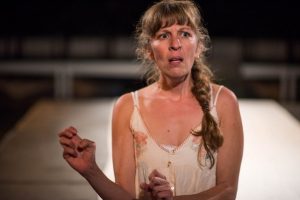 And as for what came next, things unspoken and untold until now, Lela’s story untold in its entirety, it happened like this…
​
Based on a true story, Lela & Co. gives space for a woman to be able to tell her story of being brought into sex trafficking by her husband during a time of war. Starting off as a seemingly innocuous telling by Lela of her childhood, Lela & Co. dives headfirst into this while also exploring “truth” in storytelling, who gets to tell whose story, and the resiliency of the human spirit. (theatrecentre.org)