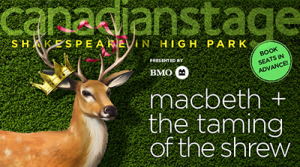 Macbeth tells the story of a general’s battle with ambition, the temptation of power and his struggle to retain his grasp on his humanity. Audiences will be challenged by Shakespeare’s remarkable text to empathize with a charismatic and deeply human tragic villain, asking themselves under what circumstances they might be tempted to commit similar acts. This production of the classic tragedy will be both thought-provoking viscerally thrilling to watch. (canadianstage.com)