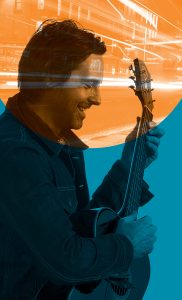 Midsummer’s weekend in Edinburgh. It’s raining. Bob & Helena eye each other across the bar. He’s a failing car salesman on the fringes of the city’s underworld. She’s a high-powered divorce lawyer with a taste for other people’s husbands. She’s totally out of his league. He’s not her type at all. They absolutely should not sleep together. Which is, of course, why they do. Midsummer is the hilarious musical story of a great lost weekend of ill-advised romance: bridge-burning, car chases, wedding bust-ups, midnight trysts, poignant pop songs, honest humour, and self-loathing hangovers. (tarragontheatre.com)