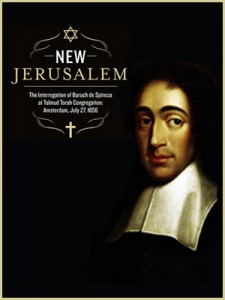 As the inquisition bears down on them, a small Jewish community flees Portugal to find a tenuous peace in seemingly liberal Amsterdam. But Spinoza, a favourite son of the community and the Rabbi’s heir apparent, is a revolutionary thinker. When the boldness of his ideas strain the bounds of Amsterdam’s professed tolerance, it leads to a dangerous confrontation between powerful political forces and this own beloved community. Based on true events in the life of one of the greatest philosophers in history, this recent off-Broadway hit from playwright David Ives challenges traditional, political and religious thinking with conviction, passion and wit. (hgjewishtheatre.com)