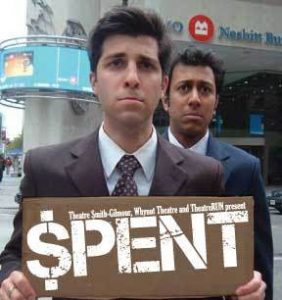 A two-person comedy highly acclaimed for its fast paced, intelligent and poetic commentary on the greed that caused the financial crises. At the heart of this clown / buffoon piece is the story of two financial executives who have lost everything in the crash and jump from a building. Winner of the Dora Award for Best Performance (Toronto), two actors play 20 characters from around the world in this physical and comedic tour de force. Created in collaboration with three seasoned international physical theatre companies, this show will have you laughing all the way to the bank. (theatrewhynot.org)