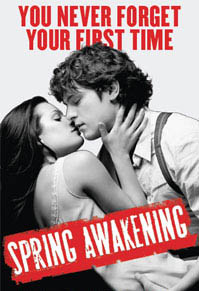 Based on the Play By Frank Wedekind

Set against the backdrop of a repressive and provincial late 19th century Germany, Spring Awakening tells the timeless story of adolescent self-discovery and budding sexuality as seen through the eyes of three teenagers. Haunting and provocative, Spring Awakening celebrates an unforgettable journey from youth to adulthood with a power, a poignancy and a passion you will never forget. (broadwayworld.com)