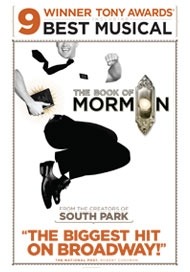 The Book of Mormon follows two young missionaries who are sent to Uganda to try to convert citizens to the Mormon religion. One missionary, Elder Price, is an enthusiastic go-getter with a strong dedication to his faith, while his partner, Elder Cunningham, is a socially awkward but well meaning nerd whose tendency to embroider the truth soon lands him in trouble. Upon their arrival in Africa, Elders Price and Cunningham learn that in a society plagued by AIDS, poverty and violence, a successful mission may not be as easy as they expected. (broadway.com)