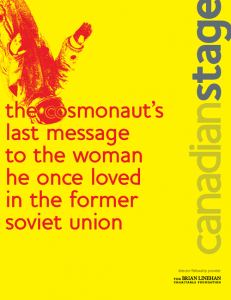 A pair of Russian cosmonauts abandoned by a crumbling state have been circling the globe for twenty years. Below, a couple confronts their failed marriage, a prostitute searches for love and a scientist struggles to make contact with outer space.

The cosmonaut’s last message… follows these inter-related storylines as lovers and strangers attempt to connect across living rooms, countries and into outer orbit. Neither the tools of technology nor the characters’ physical proximity can free them from their inability to communicate with one another.  (canadianstage.com)