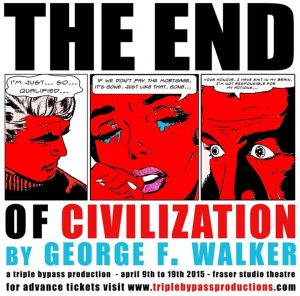 What happens to suburban privilege and entitlement when the rules of “civilization” no longer apply? When “working hard” and “being a decent person” takes you from the front of the line to the soup kitchen line?  In George F Walker’s “The End of Civilization,” we bear witness to the collapse of a suburban family’s safety net as they crack under the pressure of one too many #firstworldproblems.  A housewife terrified of missing a mortgage payment turns to prostitution… After 2 years of job hunting, her depressed husband starts killing the competition. His reasoning? “Ass kissers deserve to die.” And then someone starts putting bombs in dumpsters… Things could literally explode at any moment! (triplebypassproductions.com)