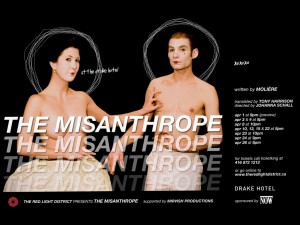 competition is their drug of choice. (and cocaine, but who’s judging?). who’s got the trendiest shoes, the best hookups, the quickest wit.

the way to the top is knocking down and cutting up whomever stands in the way-socializing isn’t a pastime, it’s a way of life, a career, a tooth and nail catfight to the highest rung, no matter who you have to throw under a bus to get there.

but one of them won’t compete anymore-he’s already the best at hating everyone and everything. the audacity of honesty is his weapon, and contempt is his sex appeal. and he is in love with one of them, and so the whole delicate balance collapses. but where can you go to be honest and free? there is no such place – u-topia = “no place.”

a play about nothing that ends with a slap and an exit that shatters a world. (redlightdistrict.ca)