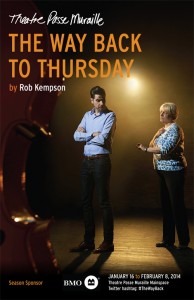 Inspired by the traditional song cycle form, The Way Back to Thursday is a musical about unconditional love that crosses generations, genders and lifetimes.

Cameron and his Grandmother have a special tradition – movie nights every Thursday.  Together they escape into the glamour and romance of the Golden Age of film.  But as Cameron grows, so does the distance between them. (passemuraille.on.ca)