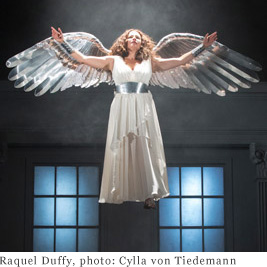 In this stunning finale Kushner brings an other-worldly, angelic presence to protagonist Prior Walter as he and his fellow sufferers negotiate how their lives will either progress or end. Palliative confessions, realizations, and declarations of faith give way to hope for the future and a lesson in humanity. (soulpepper.ca)