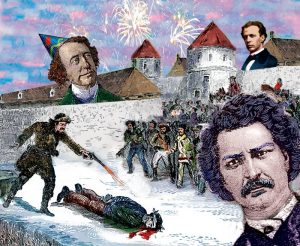 Confederation – John A. Macdonald masterminds the deal-making that leads to the fireworks on July 1, 1867. In a Montreal hotbed of anti-confederationists, Wilfrid Laurier meets Louis Riel.

Riel – Macdonald plans to turn the west into one big Ontario. Riel and Métis leaders collide with surveyors, and religious radicals plot terror; Laurier is spurred to act on his multi-cultural and secular ideals. (soulpepper.ca)