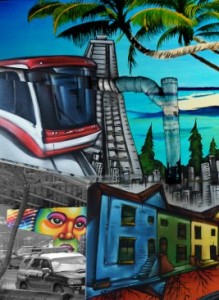 The story of three Haitian women who share a common desire to not dwell on sadness and misery. Because in the end, apart from an earthquake, there’s only one thing powerful enough to move mountains: ESPWA!

Toronto. Two young Haitian women are homesick. Nadège has never set foot on the land of her ancestors, but regardless, she knows it’s her home, that’s she’s there in spirit. Meanwhile her friend Celeste has already set sail for Haiti. She couldn’t stay away, especially after the earthquake that devastated her homeland. She had to help, at any price, by any means. There, she meets Man Sara, owner of a small shop on the side of a mountain in the town of Jacmel. But Man Sara is much more than that, “She’s the corner psychologist, actually, better yet, she’s the corner barmaid. Except that she doesn’t serve drinks. She serves hope.”  (http://theatrefrancais.com/)