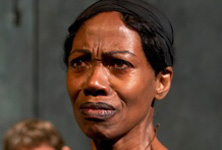 In Goodness, Jewish Playwright Michael Redhill provides the audience with a less-than-reliable version of himself as narrator. He then takes us on a brief, uncomfortable visit to Poland to explore the loss of his family in the Holocaust and then on to England, where, disillusioned and bitter, he stumbles across the story of a much more recent genocide.

He meets Althea – an ex-prison guard, now living in hiding. She tells him a story of the man she once guarded – a man thought to have orchestrated a killing-spree in her country – a man whose memory has disappeared. At the narrative core of the piece is the old man who may or may not have instigated the actions that wiped out Althea’s family. At his murder trial, he appears to have Alzheimer’s. With no memory, is he still guilty? Or is he faking the disease to escape punishment? Who decides how the story is told? Who is telling the truth? From Pinochet to Saddam Hussein, from Yugoslavia to Sudan, Goodness resonates deeply with the world of the present moment.

In a series of time-shifting tales-within-tales, with actors stepping in and out of roles, Redhill explores what it means to tell, or even know, the truth, and who is able to tell the truth to another. The play suggests a moral continuum that begins with writing, and ends with watching. What is the responsibility of a play? What is the responsibility of its audience? And, as the play itself asks: “Why do good people rush to do evil?” (volcano.ca)