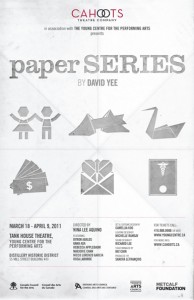 Cahoots Theatre Company and The Young Centre for the Performing Arts

An ill-advised waiter finds new uses for fortune cookies, a counterfeiter’s daughter learns the family business, an orphan re-creates her parents from paper cut-out dolls, a woman tries to write the perfect “Dear John” letter, a cab driver replaces his taxi license with his medical credentials, a man trades his relationship for an origami crane. paper SERIES is a collection of six short plays that explore how we use paper to create, amuse, define and communicate. It is, at times, quiet and reflective, raucous and violent… changing tone with every fold. (cahoots.ca)