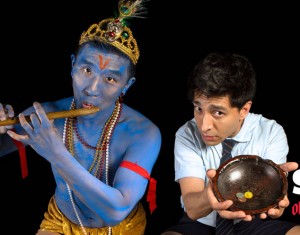 Four children from different social classes – two with the desire to purchase better kites, two with the simple wish to attend school – are trapped in a world of begging on the streets of Kolkata, India. Dressed as gods they bless the generous and threaten to curse those who are not. Together, the quartet must work to escape servitude to the mysterious “Aunty” and set a course for a new life. (youngpeoplestheatre.ca)