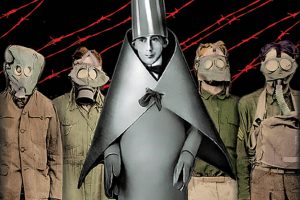 In 1914 many cultures struggle to be heard in the national dialogue, but British Canada is still a well-fed bulldog with a loud bark. When war looms in Europe, the loyal colony musters a tenth of its people to defend the Empire. VideoCabaret’s award-winning ensemble conjures the battlefront and the home front with the trench-humour of soldiers, the follies of leaders, and the tragic farce of warfare. (soulpepper.ca)